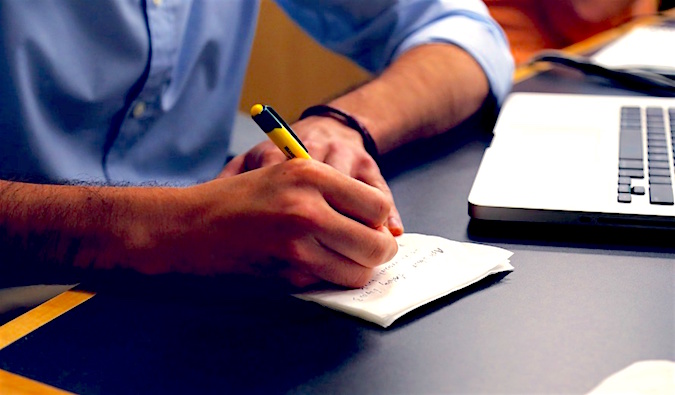 In June, I asked for reader questions but I got so many responses I decided to split the answering your questions into two parts. Part 1 can be found here, but today I’m going to answer the second half. (Note: some people asked the same questions, so I lumped their names together!!)

“We tried your budget in Southeast Asia and found ourselves short, mostly due to the inability to find good cheap food. So, as a couple with accommodation and some meals (mostly breakfast) paid-for, what is a realistic daily budget food in Europe? We are doing 9 weeks all over everywhere.” – Philippa

Creating realistic budgets is about knowing yourself. It’s about the costs of the activities and what you want to do. Everything is online now so there is no reason not to know how much something costs. Once you see how much things cost, create a budget based on those costs and what you want to do. Stick to local transportation, markets, and cheap guesthouses to keep your costs on the lower end. Assuming that, I would budget about 30 Euros per person, though you might be able to do it cheaper.

I don’t know how did you not find cheap food in Southeast Asia? The food at food vendors is like 1 dollar a meal! Either you weren’t eating there or something else was wrong but it’s hard not to eat cheap in Asia!

“In ‘The Walking Dead,’ who do you think Negan killed with Lucille?” – Sarah

I don’t watch The Walking Dead. I just can’t get into it! Now, if you want to talk Game of Thrones, we’re on!

“What do you think about monarchy? I like my King but would be nice to hear from an American what they think.” – Jonas

I think it is an antiquated system that has no place in the modern world. While I don’t think we should go stripping royal families of the world of their money, I often wonder why taxpayers in many nations still give royal family stipends. They often serve as great state ambassadors but why give them taxpayer money? While I love the idea of the “benevolent ruler”, in practice, it has rarely ever happened. As Churchill said, “Democracy is the worst form of government, except for all the rest!”

“What kind of routine, if any, do you have now that you’re living in Austin?” – Nate

My days look like this: I wake up around 7:30-8am, shower, get dressed, make breakfast, and head to my co-working space until about 3pm, go home, relax, read, cook dinner, watch Netflix, and then go to bed. Sometimes I go out for dinner with friends and have a drink but I’m mostly just here in Austin to relax for the moment. I’m enjoying my quiet time!

“What’s the third weirdest/craziest/most awkward thing that ever happened to you?” – Chie

The third craziest thing would probably be that time I got lost in a jungle in Costa Rica on my first trip.

“Why haven’t you visited more countries in Africa? I came to your blog looking for trip reports for my most recent trip to South Africa and was shocked you hadn’t been there! What’s up with that? Do you have less interest with exploring the culture of black people?” – Kaara

I have been to parts of Africa. I’ve been to Morocco, South Africa, Namibia, Botswana, Zambia, and Zimbabwe. I haven’t spent much time there because it’s a huge world and I have only been to 80 countries so there are plenty of places on my list. It has nothing to do with not wanting to explore black culture. Don’t assume such racist undertones. That’s messed up.

“I have American passport. Why is a visa to India so expensive?” – John

That’s because we make it so difficult for Indians to get a visa and come to America. We make it expensive and put onerous restrictions on them so they do the same for us. It is just a tit-for-tat thing.

“Can you ever get enough? Does the travel bug ever die?” – George

I can never get enough. Even if I slow down my travels, I’ll never stop. I love it too much. I’m hooked for life.

“What is your favorite non-travel related book?” – Savannah

My favorite non-travel related book is The Old Man and the Sea by Ernest Hemingway.

“Do you miss having a sense of home? And, on average, how much do you spending annually on travel?” – Brendan

I feel the biggest sense of home when I am on the road. That’s my home and happy place. And you can travel the world on $50 a day! Though sometimes I spend more depending on how often I travel for work related events.

“Are there any tour companies out there that cater to solo travelers and don’t charge a single supplement?” – Megan

There are a lot of tour (and cruise) companies out there that don’t charge a single supplement. Most of the tours that do are higher-end tours I wouldn’t recommend anyways! Look into Intrepid Travel. They are the featured tour company on the site, the one I use, and one that doesn’t charge a single supplement. If any company is still charging that in 2016, you shouldn’t use them!

“I saw your post about seeing Hamilton. What is your favorite musical(s)?” – Anne

My favorite musical is Les Miserables. I’ve seen it about five times. I read the unabridged version of the book in high school and have always loved it. The musical is amazing though the recent production in NYC was less than stellar.

“What is the one question that you wish people would ask you?” – Tosha

I wish more people would email me saying “Hey, I had a question but, instead of filling your inbox, I just searched your site and found the information I was looking for. No need to email me back, I just wanted to say thanks!”

That save me a lot of time so I could focus on writing.

“It seems that most of your travels are on your own. Do you ever wish you had a companion to experience the trip with you? What do you see as the advantages of solo travel versus travel as a couple or with a few fellow travelers?” – James

If I waited for people to travel with me, I would still be sitting in my cubicle wondering when Joe is going to book his ticket to Australia with me. I like solo travel, though I do wish I had a friend or companion sometimes. It really depends on where I am going and the mood of that place. You meet a lot of travelers on the road in places like Europe, Central America, or Southeast Asia but whenever I’m in the Caribbean, Pacific, or Africa on safari, I wish I had a friend with me to enjoy the quiet with. I don’t like being still and being alone at once. Oddly, I am most relaxed when a lot is going on. Here’s a post I wrote on why I travel alone.

“How do I follow my passion of traveling while also following my other passion, which is teaching? I’m young and currently taking classes to get my teaching certificate.” – Stephanie

Become an English teacher overseas! It’s pretty easy, especially if you have a teaching certificate! Jobs are everywhere! I wrote a book about it.

What is the strangest thing that you’ve experienced in a hostel?” – Shelby

I had my roommate take a shit in our hostel dorm. That was the strangest and grossest thing that ever happened to me in a hostel. I still have nightmares about it.

“Do you know of any places in the world that are still like Kathmandu was 20-40 years ago? The people were wonderful, and it all looked and felt like the middle ages.” – Willem

I wasn’t alive 40 years ago so I can’t say but I think romanticizing the past is not the best way to travel. While you can compare places that way (Nicaragua’s tourist development is what Costa Rica was like in the early 2000s), saying, “I wish I found a place like Thailand was 20 years ago” is The Beach syndrome. It is the constant search for a romantic version of the world that doesn’t exist not a search for the world as it is.

“Are you in these new business ventures of yours for the long-haul, or can you see yourself selling these business ventures in the relative short-term future (10 years or sooner) to make a quick but possibly large short term profit from the sale of them?” – Kyle

I always start every business or new venture with the intention of being there for the long haul.

I believe it is because English is a horribly inconsistent language.

“Whatever happened to living in Sweden and with you and the Swedish girl who convinced you to move there?” – Sarah

I never moved there for a Swedish girl, I moved there because I love Stockholm. It was only ever going to be temporary but I left sooner than I thought I would as I never really found a good place to live – all the apartments I found didn’t want to take a sublease or were too far from the city.

“What was the first thing you did when starting your blog that helped to drive traffic and income?” – Kelly

The number one thing to do when you start a blog is to grow your audience and to do that, I strongly encourage you to do guest posts and interviews for everyone under the sun. Be everywhere. Before you can make money from your blog, you need people reading it so your primary goal should be growing your traffic.

“As a Peace Corps volunteer who has been living abroad for a year now and who has travelled a bit before this, I feel like my friendships from home are slowly growing more distant. The longer I’m here the more difficult it is to keep in touch. Did you ever feel this way throughout your travels?” – Rachel

I have felt this way and still do. This is a constant problem. While I keep in touch with friends and family via Facebook and Skype, over the years I’ve lost touch with a lot of friends and it was painful. I wrote about it in depth in this post called “Travel and the Art of Losing Friends. It’s best to read that because, if I start typing again, I’ll end up writing another 1,000 words!

“What was the most budget-friendly international trip you planned? Can you elaborate on how you planned it, duration of the trip, where you stayed, what you ate, and total cost? What is the most unusual food you’ve tried and do you recommend it?” – Grace

Well first, the most unusual food I tried was fried maggots in Thailand. They tasted like salty French fries! To answer your other question, any destination can be budget friendly. Some places are cheaper than others but you can always do a place on a budget. It just depends on if you’re willing to take the steps to make it happen. To me, the most budget-friendly destination is Southeast Asia. You can’t get more value for your money than that place. This post goes into detail on how I planned my route there and there are other posts on everything else if you search here.

****That was fun! I’ll be doing these posts every few months but if you have an immediate question you want answers, write it in the comment section below and I will answer it!

Packing Tips for an Adventure Vacation

Prev Next
Leave A Reply
Cancel Reply
Stay With Us